Hutchinson Teeth: Everything You Need To Know 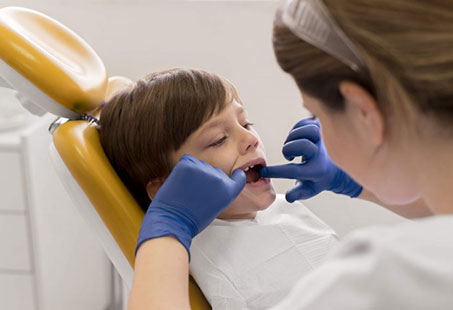 According to the World Health Organization (WHO), globally, there were 661,000 cases of congenital syphilis in 2016. The Bacterium Treponema Pallidum is responsible for this, and it spreads when a person comes in contact with the sores of an infected individual. It is a very common sexually transmitted infection (STD) that can pass from the mother to the baby through the placenta while it is in the womb or during childbirth. The disease resulted in adverse birth outcomes in 355,000 cases according to the WHO report. One consequence of it is Hutchinson teeth.

Since almost two-thirds of the children born with congenital syphilis do not show any symptoms of the disease, it goes undiagnosed. Hutchinson’s teeth do not occur in isolation. It’s a part of the “Hutchinson triad,” which also includes eighth nerve deafness and interstitial keratitis (vascularization and inflammation of the cornea). Screening tests help in the diagnosis of congenital syphilis. Otherwise, it can lead to late congenital syphilis, whose symptoms appear after 2-5 years. Most of the clinical signs develop later.

What Are Hutchinson’s Teeth?

Of the Hutchinson’s triad, Hutchinson’s teeth only appear when a child starts sprouting permanent teeth. Therefore, its symptoms are not noticeable on deciduous or milky teeth. They can affect both teeth in the upper and lower jaw. Mainly, they affect the incisors and molars.

You’ll also notice a notch on the biting surface of the teeth in the shape of a crescent. The teeth also appear “peg-shaped,” where they’re small with wide spaces in between. These teeth may be less wide than the gingival margin (thin gum tissue touching the tooth).

Additionally, Hutchinson’s teeth display weakening and discolouration of the enamel. Even though syphilis itself is treatable, this condition is permanent. They are named “Hutchinson” after the English surgeon/syphilologist (a person who specializes in the study of syphilis) Jonathan Hutchinson, who described it.

The congenital form of syphilis can also result in the formation of Mulberry or moon molars. Normally, a molar has 4 cusps (bumpy elevation) on the biting surface of the tooth. However, a mulberry tooth has poorly developed, multiple cusps on the grinding surface, giving it the appearance of mulberry fruit, hence the name Mulberry molars. These develop because of damage to the tooth buds in the child’s oral cavity. Mulberry molars are at a greater risk of developing dental caries (cavities).

Can You Have Hutchinson’s Teeth Without Syphilis?

No. Hutchinson’s teeth are symptomatic of congenital syphilis, and they always affect permanent teeth. However, a case study in the Consultant for Pediatricians in 2013 showed a 3-year-old girl with notches on her deciduous teeth. It wasn’t a result of congenital syphilis. In fact, the child had dental dysplasia (a genetic condition that results in the abnormal development of dentin). In this case, the child will be able to grow normal permanent teeth.

The dental abnormalities characterized as the “Hutchinson teeth” result from the bacterial infection syphilis that a mother passes onto her child during pregnancy or birth. It is possible for the mother to acquire syphilis during pregnancy or before getting pregnant. The likelihood of a child getting congenital syphilis increases when the mother acquires it while she’s pregnant. Syphilis can result in infant mortality, morbidity, and stillbirth.

What Are the Symptoms of Congenital Syphilis?

There are different symptoms of congenital syphilis. At an early stage, the newborn may have:

How To Treat Hutchinson Teeth?

Since Hutchinson’s teeth are a symptom of syphilis, it is important to treat the bacterial infection first. For this purpose, you need to consult a paediatrician who specializes in infectious diseases. To treat infection, there may be a need for laboratory diagnosis of syphilis and treatment consists of penicillin. Some of the symptoms of Hutchinson’s triad may need corticosteroids for treatment.

However, as far as Hutchinson’s teeth are concerned, since they affect the permanent teeth, their shape and appearance won’t change. It can cause functional and aesthetic concerns, which is why there are some dental restorations for it.

In dental crowns/bridges treatment, the dentist will shave the existing teeth to place a cap on top that entirely covers the surface of the teeth on all sides. They can restore the normal functioning of the teeth, where you can grind and chew food more easily. If the child has severe tooth damage, crowns can protect it from further damage.

Having widely spaced Hutchinson teeth, the children may have difficulty biting food. For this, they can get dental bridges, which essentially bridge the gap between the teeth so that their teeth appear more even.

One of the most common treatment options for dental caries is fillings. Since your child’s teeth are more prone to getting cavities, s/he can get fillings to relieve the pain and improve the appearance of the teeth. The enamel of children with Hutchinson’s teeth is weak, so they are more likely to develop cavities, even if they do not have Mulberry teeth.

It is also possible for children with Hutchinson’s teeth to get a dental veneer. However, their enamel must be in somewhat good condition. Moreover, there should be enough tooth surface area for the adequate placement of veneers.

This kind of treatment is not possible in the early years of development. That’s because the jawbone does not stop growing till the age of 16 in girls and 18 in boys. They have to wait till then. However, after that, they can get a dental implant fixed into the jawbone and have a crown or bridge on it.

How To Care For Hutchinson Teeth?

You have to care for your teeth just like you normally would. That means you need to brush your teeth twice a day for at least 2 minutes. Make sure that the bristles of the toothbrush aren’t bent and out of shape. Otherwise, they won’t clean all the nooks and crannies as effectively. And use fluorinated toothpaste. Follow this up with an anti-bacterial mouthwash.

After that, make sure that you floss your teeth by gently gliding the thread in a u-shape on both sides of the teeth to remove any food particles stuck on the surface of the teeth and between them. Lastly, what you put in your mouth matters most. Avoid sweet, sticky foods that can increase the risk of cavities. You can also consider swishing water in your mouth after you eat something sweet. And make sure to get regular dental checkups every 6 months.

Is There A Way To Prevent Hutchinson Teeth?

There’s a time window during which a child’s at a greater risk for developing this disease i.e. if the mother had syphilis for around 2 years. According to the University of Michigan Health, if the infected mother is treated for syphilis while she is pregnant, the baby has a lower chance of developing congenital syphilis. It is possible for the baby to not get infected at all if the mother is treated for syphilis 4 months before she gets pregnant.

One study published in Acta Dermato-Venereologica, a peer-reviewed journal, in 1963 found that children whose mothers had gotten treatment for syphilis in the second half of pregnancy or the 3 months following birth did not develop any dental abnormalities. This was in contrast to 36 children who got the treatment 4 months after birth. So early treatment is what results in the prevention of Hutchinson’s teeth and other symptoms of congenital syphilis in children.

Congenital syphilis is a bacterial infection that the mother passes onto the child during the gestation or birthing process. It can result in the development of Hutchinson’s teeth, a part of Hutchinson’s triad. Since it does not appear on the deciduous teeth, these symptoms may not appear until the child is at least 5-6 years of age and starts growing permanent teeth. They will need a dental restoration to improve the functioning and appearance of their teeth.