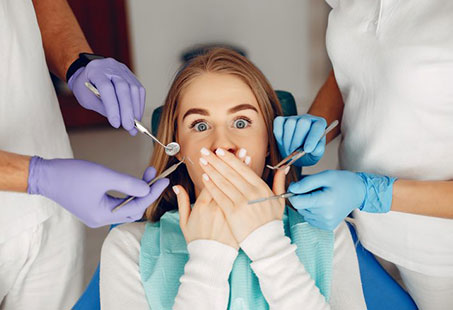 Going to the dentist can be a daunting experience for many people. The idea of having some very sharp tools poked around in your mouth can fill them with fear. They might wonder what will happen if things go awry. The loss of control and the uncertainty of the situation alone can make some people avoid going to the dentist. There is such a thing as dental phobia. The severity of dental anxiety can cause health problems. There is a way to deal with this problem though, and that is sedation dentistry.

The idea of sedation dentistry is to make the patients feel more comfortable in the dental chair during the treatment. A person with dental phobia can keep delaying the visit to the dentist’s office at the behest of their oral health. If they’re suffering from an oral health issue, the problem can worsen with time, and the person might have to undergo even more invasive and extensive surgery. However, sedation dentistry can help ease your fears and anxieties a little so that you can get the dental procedures that you need.

What Is Sedation Dentistry?

Sedation dentistry allows the patients to relax during the procedure. This way, they can get the dental treatment that they need, and the dentist is also able to do his/her job with ease and without interference from the patients. There are three different levels of sedation; let’s take a look at them.

According to the American Dentistry Association (ADA), minimal sedation minimally depresses the consciousness level of the patient. They are still awake and can respond to stimuli and verbal commands. However, they might face some problems with coordination and thinking. The patient feels relaxed at this level of sedation.

Even though you’re awake, you might not remember much about the treatment. You might be able to hear verbal commands on tactile stimulation by the dentist. ADA refers to it as a “depressed level of consciousness.” You might even slur and feel groggy as a result of moderate sedation.

In this sedation dentistry, the patient is nearly unconscious. But, they can be awakened. The consciousness is also depressed at this level of sedation. The patient can wake up if given painful stimulation.

General anaesthesia is the complete loss of consciousness. It is a combination of drugs that work to put the patient in a sleep-like state where they cannot feel pain.

What Are The Different Types of Sedatives Used?

The patient is given nitrous oxide, also known as laughing gas, mixed with oxygen through a nose apparatus. It helps the patient relax before the beginning of the treatment. The patient can start feeling its effect after as little as 30 seconds. However, the effects of nitrous oxide can wear off quite quickly. Since it is quite mild, someone with more serious dental anxiety might need oral sedation on top of laughing gas. Patients are able to drive themselves home after receiving this kind of sedation.

In this type of sedation, the person is given a pill, usually, an hour before the surgery or as directed by the dentist. It can induce minimal to moderate sedation depending on the dose of the medicine given. The person receiving oral sedation may feel groggy and drowsy. They might even end up sleeping during the surgery; a slight nudge will wake them up, though. A person cannot drive after receiving oral sedation. Therefore, they must bring a friend or family member with them to drive them home after the surgery.

Here, the patients receive the sedative drugs intravenously. The dentist is able to adjust the level of sedation too. You might feel sleepy during the procedure and not remember much about it. Of the different types of sedation, intravenous (IV) sedation is most preferred.

There are a few reasons why IV sedation works well, one being that it starts working quickly. The patient does not feel pain during the surgery with this type of sedation. The dentist is able to perform the surgery with greater ease as there is no interference from the patient. You can undergo more than one surgery under IV sedation.

Are You a Candidate for Sedation Dentistry?

Before undergoing the procedure, you need to discuss your fear and anxiety about the treatment with the dentist. Sometimes the sedation is necessary. For instance, patients who have small mouths can feel more pain and discomfort during the surgery, so they can receive sedation. Those who fear or become anxious and nervous during dental procedures also commonly receive dental sedation.

If a patient has trouble sitting still in the chair in the dentist’s office, they might receive dental sedation. The dentists sometimes give children mild sedatives because they don’t sit still in the chair. That’s because the movement of children can cause impediments for the dentist as s/he is performing the surgery. People with sensitive teeth can also feel discomfort during the procedure. Some people have a very sensitive gag reflex. An overactive gag reflex can make the dental procedure quite difficult for the patients. Thus, sedation works well in this case.

People who’re undergoing a complicated and long surgery can also receive sedation. Before the surgery, the dentists will also ask for your medical history. That’s because patients with some medical conditions need sedation. Also, if you’re already taking medication for some condition, you need to tell the doctor because the sedative drugs can mix with medicine and cause a drug-drug reaction. If you’re allergic to certain medicines, you need to inform the dentist. In oral and IV sedation, the dentists usually use benzodiazepines. If you’re allergic to them, you need to tell the dentist so they can use another medicine.

People with respiratory diseases are not good candidates for sedation because sedatives slow down breathing, which is dangerous if your lungs are not functioning normally. The dentists also do not recommend sedation to pregnant women. They cannot get oral or IV sedation at any time during the pregnancy. Make sure to tell your dentist if you’re pregnant.

How To Prepare for Sedation Dentistry?

Before any surgery, you need to provide your complete medical history to the dentist. Some medications and illnesses can make it impossible for the dentists to perform the surgery since it can endanger the life of the patient. So, if anything happens, you need to inform the dentist before the procedure takes place.

It’s always better and safer to have someone accompany you to the clinic so that they can provide you support after the surgery. The patients might struggle with coordination, and since you cannot drive because of your state, have someone pick you up and drive you home.

What is the Aftercare of Sedation Dentistry?

Your dentist will make sure to provide you with aftercare instructions. Depending on the type of treatment you’ve had and the sedation you’ve received, it can vary. However, it’s for sure that you shouldn’t smoke or drink alcohol after the procedure. Also, you should rest and give your body time to heal. It’s recommended to drink lots of water to get rid of the anaesthesia effect. The dentist may prescribe medications to you. Take them as instructed.

How Much Is Sedation Dentistry?

It depends on the type of sedation and the duration of the treatment. There may be an hourly rate, and you might be charged for any increments. It can cost you as much as £100-250 in the UK. In Turkey, it’s going to cost you less due to the low cost of living.

Many people are uncomfortable going to the dentist because they fear the procedure itself, and even the idea of dental treatment can make them feel anxious and nervous. Some patients can feel more pain or discomfort during the treatment due to some medical condition or other reasons. They can be given sedation to help them feel calmer and relaxed as the dentist is performing the procedure.