Baking Soda for Teeth: Can It Safely Improve Your Oral Health? 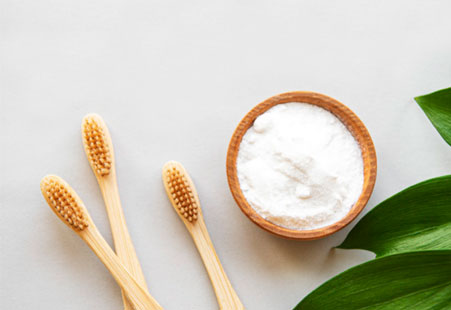 Baking soda has become a household staple. From cooking to cleaning, personal care, and dental hygiene, it finds many uses. However, in recent years, baking soda for teeth has been popularised on social media. Many influencers have hailed it as the ultimate DIY teeth whitening hack. However, not many realise that it can also end up damaging the teeth.

Seeing that baking soda is virtually free and easily accessible, many people have tried it for their oral hygiene. This is especially true for those who have stained their teeth from certain foods and habits. But an attractive smile does not come cheap.

What Type Of Baking Soda For Teeth Is Used?

Baking soda is pure sodium bicarbonate (NaHCO3), and that’s used for the teeth. There are no different “types” of baking soda. It’s a salty, white, fine powder that’s more commonly used as a leavening agent. But because it acts as a natural whitener, some people also use it as a substitute for bleach.

Owing to its granular nature, baking soda is also used as an abrasive for teeth cleaning and mechanical teeth whitening. It is not considered dangerous as long as only small amounts of it have been ingested. Also, it is not toxic.

What Does Baking Soda Do For Your Teeth?

Baking soda may be beneficial for your teeth in the following ways:

Baking soda for teeth is most popularly used for whitening. Since it’s a mild abrasive, it can help dislodge the dental biofilm that forms on the teeth and clean the extrinsic stains present on them.

According to a review published in the Journal of The American Dental Association, toothpastes with baking soda are more effective at removing stains than those without it, even when they’re more abrasive. However, keep in mind that you should apply too much pressure on your teeth when using baking soda.

By dislodging the plaque on the surface of the teeth, baking soda can help keep them healthy. Ridding your teeth of plaque is necessary because the bacteria in them produce acids which can damage the enamel and the inner layers of the teeth.

One study published in the BDJ Open found that toothpastes that contained sodium bicarbonate were better at removing plaque than those without it after a single, timed brushing. Even though herbal ingredients were added to the baking soda toothpaste, it didn’t make any difference.

In addition, baking soda has been shown to have an antibacterial effect at high concentrations, which can also help with your oral health. Other than plaque removal, research published in the American Journal of Dentistry also found that 35% and 20% of baking soda toothpaste was effective in reducing inflammation and bleeding of the gums.

How To Use Baking Soda For Teeth?

There are different ways in which you can use baking soda for teeth. These are as follows:

If you’re wondering how to make baking soda paste for teeth at home, you can follow these steps:

Some people also use their fingers instead of a toothbrush, but that may be less effective as it won’t easily access all the corners of the teeth. Also, some people consider adding apple cider vinegar, citric acid (lemon) and hydrogen peroxide to the paste for “extra effect.” That, however, is not a good idea as it can be too harsh for your teeth.

One study published in the National Journal of Maxillofacial Surgery suggested that baking soda rinse may be “as cheap and effective” as the prescription chlorhexidine disinfectant and antiseptic mouthwash and alcohol-based mouthwashes. Some people also prepare rinses of baking soda, and you can do it as follows:

You can also consider sprinkling baking soda to the toothpaste. The grains will stick to it, and it will be less messy than using the paste. However, adding an abrasive to a toothpaste that’s already for teeth whitening can be too harsh for your teeth.

How Often To Use Baking Soda For Teeth?

You should not brush your teeth with baking soda more than once or twice per week. In any case, if you’re considering doing it, you should first discuss this with your doctor. That’s because using too much of it every day will end up damaging your teeth.

This is especially so if your teeth are already in bad condition. Also, keep in mind that baking soda for teeth is not the same as toothpaste. It’s not a substitute for it, so you need to keep brushing your teeth with toothpaste.

How Long Does It Take Teeth To Whiten Using Baking Soda?

According to the Mayo Clinic, whitening toothpastes containing abrasives can take 2-6 weeks to show results. However, it can depend on the kind of stains you have on your teeth. Remember, baking soda for teeth does not work for internal stains or discolouration caused by tooth damage.

Is Baking Soda Bad For Your Teeth?

While it may be popular on social media, many have warned against the potential harms of baking soda.

Decay of the enamel can lead to cavities, infection, and even loss of the tooth. And if you’re already suffering from an oral health problem like gum disease, it can end up worsening your condition.

The American Dental Association warns that the use of substances that are too abrasive can make the teeth yellower. This is a consequence of enamel damage. Once it gets damaged, the dentin underneath is exposed, which is yellow than the enamel. So, instead of having white teeth, you’d end up with more yellow teeth. And this kind of damage is irreversible.

This can be a problem if you’re using toothpaste that’s just baking soda and water. Fluoride is good for your teeth because it protects them against decay by ensuring remineralization. That’s why it’s recommended that you don’t rinse your mouth after brushing with fluoride toothpaste. However, baking soda cannot do the same for you.

Large Amounts Can Be Dangerous

Be careful not to ingest baking soda when you use the paste or oral rinse. That’s because large amounts of it can be poisonous. According to the Gastrointestinal Society of Canada, when you’re drinking baking soda, you should only mix half a teaspoon of it in half a cup of water.

Also, they recommend against baking soda for pregnant women. Large amounts of it can also cause heart problems. Make sure to consult your doctor before trying this out.

Professional Teeth Whitening Vs. Baking Soda: Which One Is Better?

There are many differences between the two. Depending on your situation, a professional teeth whitening might suit you better.

How Can You Better Take Care of Your Teeth?

Instead of having to use baking soda for teeth, you can keep your teeth healthy by doing the following:

Baking soda for teeth is popularly used for teeth whitening. Because of its alkaline nature, it can also help you get rid of some bad bacteria in the mouth. However, since baking soda is abrasive, too much of it can damage your teeth permanently. Also, keep in mind that it is not a replacement for routine cleaning. Be careful about its use, and best consult your dentist first.