Brits Only Have Bad Teeth in Films 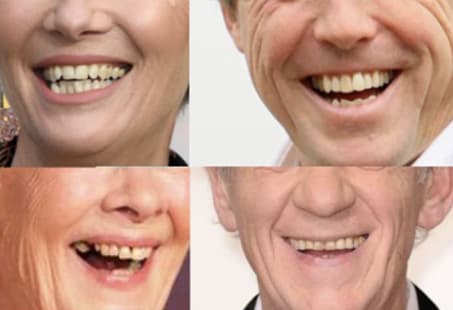 Why British Actors Refuse To Fix Their Teeth

It’s a long-running joke that the British have bad teeth. They have a reputation for having poor oral hygiene. And adding yellow icing to their teeth is their love for tea. One episode of “The Simpsons” famously featured the broken, missing, and decayed buck teeth of Prince Charles, Sherlock Holmes, and the Queen’s guards, among others. However, is that a fair portrayal of the actual teeth of the Brits?

A study published in the British Medical Journal, aptly titled “Austin Power Bites Back,” disproves the myth that the British have worse teeth than their American counterparts. In fact, researchers from both Harvard University and University College London found that the average number of missing teeth was 6.97 for the English participants while 7.31 for those from the States. Moreover, education and income-related oral health inequality were also greater in the US. So, where did the idea for bad British teeth come from?

The “British teeth” trope is often reinforced by the American media. Clearly, it’s an American joke. Often, what Americans consider “bad” is just a matter of taste. For instance, teeth naturally turn yellow as a part of ageing. It’s not always because of bad oral hygiene. As long as you aren’t experiencing any oral health issues, slight crookedness is also normal. Having a gummy smile is also a cosmetic, not a functional problem.

“Hollywood smile,” characterised by straight and sparkling white teeth because Hollywood has always been about unainable perfection in everysense while the British film industry likes to “keep it real.” British cinema never idealised flawlessness. Characters in British films are often flawed and more complicated. So actors have made an intentional choice of keeping their teeth imperfect so they can look more authentic and appeal to their audiences. The popular British period dramas portrayed eras when oral health wasn’t much of a focus.

There are so many iconic names in the UK who are famous for their smiles that are less than perfect. Izbel Aksit, a cosmetic dentist at Longevita, was also asked what these Brits could do to make their teeth more “Hollywood.”

Emma Thompson has been a part of many period films like Remains of the Day and Henry V and even won Academy and BAFTA awards for her roles in Sense & Sensibility and Howard’s End. Having uneven, yellow-tinged teeth only adds to her mischievous, and playful athenticity.

However, if we were to fix her teeth, according to Dr Izbel Aksit, Emma could benefit from 10+10 full veneers on all visible teeth. Dr Izbel also points out that you can see the old metal trim of a crown on the rear right of her teeth. Through veneers, her teeth won’t look as crowded or stained anymore.

The beloved Dame Judi Dench has been a part of many historical dramas like Shakespeare in Love, Victoria and Abdul and Mrs Brown. A shiny set of Hollywood veneers would look unrealistic in such films.

However, since she has missing teeth, according to Dr Izbel, it can cause both aesthetic and functional problems for her. “A zirconia bridge can be used to fix the empty areas and gaps in the teeth, improving the appearance. This procedure would also extend the life of the existing teeth. With 12+10 member zirconia crowns and bridges, Dame Judi Dench can keep her teeth intact and dramatically improve the appearance,” said the cosmetic dentist.

Having played many of Shakespeare’s roles and, more famously, Gandalf the Grey in Lord of the Rings and The Hobbit trilogy, Sir Ian McKellen has always stuck to his natural teeth. According to Dr Izbel, his teeth have colour differences and abrasions, which can be fixed through 10 or 12 durable zirconia crowns on the upper jaw. For his lower teeth, she recommends a scale and polish treatment.

Olivia Colman’s gummy smile has only added to her comedic persona in many of her films like The Favourite, Hot Fuzz, and The Lobster. Her goofy teeth suit her characters, who are often awkward, clumsy, reluctant, and shy. However, if Miss Colman were to fix her smile, the cosmetic dentist at Longevita recommends Botox along with teeth whitening.

Known as the king of rom-coms, Hugh Grant is often depicted as the awkward, scruffy, floppy-haired Englishman who is still impossibly charming. While his teeth are less-than-perfect, many people find his smile attractive. Still, if he were to make a few cosmetic adjustments, Dr Izbel says, “10+10 units of full veneer would work to equalise the levels of the teeth for a wider, whiter and more elegant smile.” That would take care of the differences in the colour and level of his teeth.

Keira Knightly also has famously crooked teeth. Calling her own teeth “wonky” in an interview with CBS, the actor said that she didn’t feel the need to change herself, even though many people in Hollywood are told to straighten or whiten their teeth. While her teeth are fixable, they would take away from her unconventional beauty.

However, according to Longevita’s cosmetic dentist, Keira’s teeth crowding can cause more dental cavities. It can also give her a bad breath. According to Dr Izbel, “by veneering 8+8 or 10+10 members, we can create an equal, aesthetic, easier to clean and whiter smile (for her).”

When it comes to portraying their characters more authentically, British actors often use their imperfect teeth to their advantage. Unlike their American counterparts, they don’t feel the need to fix their teeth. While not all imperfections are necessarily bad, having yellow teeth due to poor oral hygiene or crooked teeth can affect your physical and mental health. And if you delay treatment, it will only worsen the problem. Therefore, regardless of whether you are British or American, you should get your teeth checked regularly.