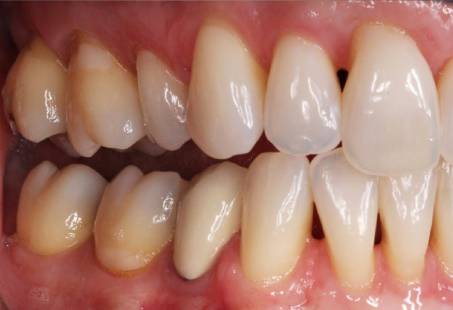 Many people have slight gaps and spaces between their teeth due to one reason or another. However, sometimes, geometrical shapes like triangles are present between the teeth. Black triangle teeth are not just a cosmetic issue but can also be a sign of a more serious oral health problem.

Normally, gum tissue envelops the base of the teeth, and it helps ensure that the teeth stay healthy. So, in their absence or lack thereof, your oral health can worsen. Black triangle teeth can develop due to different reasons. It’s important to understand them so that you can seek the right treatment.

What Are Black Triangle Teeth?

Black triangle teeth refer to the presence of a triangular gap between two teeth. It is also known as open gingival embrasure and is characterised by the absence or lack thereof of the gum tissue between the teeth (interdental papilla). It’s actually quite common. According to one study, 67% of people over the age of 20 have black triangle teeth, while only 18% below the age of 20 have them.

The absence of gum tissue between teeth makes them more vulnerable to different problems. For instance, it can make it difficult for you to sound certain words correctly. Saliva can also seep through those gaps. More dangerously, it creates space in which food particles can get stuck. If it’s not cleaned properly, the accumulation of plaque can cause gum disease and tooth decay.

Other than that, many people find them unsightly. Research published in the Journal of Esthetic and Restorative Dentistry found that both patients and dentists found black triangles unattractive at 3 mm distances.

In fact, one study published in the European Journal of Prosthodontics and Restorative Dentistry even found that black triangles were the third-most disliked aesthetic problem after dental cavities and crown margins. More commonly, these black triangles can be seen between the front teeth in the upper jaw.

Black triangle teeth may be the result of the following:

According to the US National Library of Medicine, older adults are more likely to suffer from gum recession. It could be due to “a lifetime of brushing too hard” or gum disease. Adults’ oral health is also negatively affected by diet changes, reduced saliva production, and medication intake resulting in dry mouth. These factors can increase the likelihood of black triangle teeth in old adults.

Using the wrong type of brush can also do much harm to your teeth and gums. The hard bristles can damage the soft tissue of the gums. This can also result in the recession of the gums, which will result in black triangle teeth.

One study published in the Open Dentistry Journal even showed that the use of interdental brushes (a tiny version of bottle cleaning brushes) could also end up causing this problem because their size is too large. So, be careful about the kind of brush you’re using and how you’re using it.

Those who naturally have a triangular tooth shape will end up with triangular gaps between their teeth. That’s because the tooth is wider at the top and narrower at the bottom, where two adjacent teeth are not able to touch each other. This is not so much of a problem in those whose teeth are rectangular.

The type of gum tissue you have can also determine whether or not you’ll end up with black triangle teeth. In a study published in the Dental Clinics of North America, researchers identified two types of gum tissues in terms of their shape and size:

Those who have ‘thin and scalloped’ gums are more likely to have black triangle teeth. That’s because research has shown that this type of gum is more vulnerable to recession. Additionally, blood supply is reduced in ‘thin and scalloped’ gums so they heal slower than ‘flat and thick’ gums. So, in the case of inflammation, the thick and flat gums can respond better to the ‘injury.’

Receding gums is a symptom of gum disease. Smoking, certain medications and illnesses, and poor oral health can cause gum disease. Bacteria accumulate near the base of the teeth, hardening into tartar. The gum tissue is inflamed and starts to recede. The roots of the tooth can start to show through, and this creates even more space for food particles and bacteria to get stuck, worsening the problem. But it’s the recession of the gums that results in the formation of black triangle teeth.

There are different factors that can result in jawbone loss, such as osteoporosis, missing teeth, and even gum disease. The loss of the bone can also end up causing the recession of the gums, which can leave spaces between the teeth in the form of triangles.

You are also more likely to develop black triangle teeth if you are undergoing orthodontic treatment. As the teeth shift to a new position, it can expose spaces between the gums. If improperly used, certain devices can also end up causing damage to the gum tissue, which can result in the formation of black triangles.

One study suggests that you can predict who will get black triangles following an orthodontic treatment based on the age of the patient (when they come in for their first consultation), how long the treatment lasts, and the shape of the tooth crown.

What Are The Risks Of Having Black Triangle Teeth?

The space between the teeth will make it easier for food particles and bacteria to accumulate and result in inflammation and recession of the gums.

On the other hand, these black triangles may have formed as a result of an oral health problem that’s causing a recession of the gums. So, whether you always have had back triangles or see them forming over time, you should make sure to get in touch with a dentist. That’ll prevent your oral health from worsening.

How To Fix Black Triangle Teeth?

The treatment that your dentist will recommend will depend on the cause of the black triangles.

One of the reasons for black spaces between teeth is poor oral hygiene. If you have a plaque that’s hardened into tartar, you’d need to get your teeth cleaned professionally, as brushing won’t help. Scaling and root planing are the two treatments that are usually recommended for this. These will allow the gum tissue to reattach to your teeth, which will fill up the triangular gaps.

When it comes to teeth cleaning, remember that brushing your teeth the wrong way can also cause this problem. Make sure to use a soft-bristled brush. Also, when flossing, make sure that you don’t end up damaging your gums.

Composite bonding makes use of a moldable composite-resin putty to hide any small tooth cracks or gaps. Here, tooth-coloured composite bonding material can be used to fill the gap between the teeth. Either that or the dentist may recommend using gum-coloured, pink resin to fill the gap. It’s a relatively quick process, but keep in mind that results are not permanent (lasts for 2-3 years).

Veneers are thin tooth-coloured shells that can be cemented to the front surface of the teeth. One way to camouflage the black triangles is to get veneers. This will require slight prepping of the teeth so that the placement of veneers doesn’t make the teeth look too ‘thick.’

Here, it should be noted that there are also ‘gingival veneers’ that can be used to hide the black triangle and protect the teeth. A gum veneer is like a denture for the gums. It’s fleshy, pink acrylic or silicone. Make sure to discuss your needs with the dentist, so they can recommend treatment accordingly.

Bone loss from missing teeth can be one reason for black triangles. To prevent that from happening, you can consider getting dental implants. The titanium screw will stimulate the jawbone, preventing its deterioration. A dental crown is further placed on the implant to restore the full function and aesthetics of the mouth.

Although, as mentioned earlier, the reporting of the teeth by orthodontic treatments can result in the formation of black triangles, they can also help resolve the issue. So, you can also consider this option.

Some animal model studies have shown that injecting dermal fillers into the gum tissue can also help close up the black triangles between teeth. The filler essentially raises or puffs up the area to which it is injected. This can help resolve the issue of embrasures.

The dentist can also recommend reconstructing the gum tissue to improve the appearance of the black triangles. For this, the tissue will be removed from other areas of the mouth and placed into the spaces between the teeth. Keep in mind that if bone loss has occurred, you would also need bone graft surgery.

How To Prevent Black Triangle Between Teeth?

Make sure to do the following to prevent the formation of black triangles between teeth (if possible):

This way, you can either prevent the problem entirely or catch it sooner rather than later.

The black triangle between teeth is something that bothers many people. Keep in mind that it’s not always a cosmetic issue and may have to do with your oral health. There might be a reason why your gums are receding or why your jawbone is deteriorating. If you do have them, you should make sure to get in touch with a dentist. That’s because even if you don’t have a problem now, it can become one later.