Why You Need To Avoid Light Smoking After Dental Implants 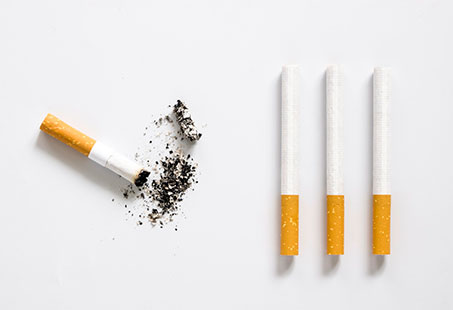 More than a billion people around the globe smoke. Despite its dangers, it remains one of the most prevalent habits.

Considering the havoc that smoking cigarettes can wreak on the mouth, dentists strongly advise against smoking, especially before and after procedures like dental implant surgery.

Still, many wonder if light smoking after dental implants would do them no harm. However, the truth remains that smoking can reverse all the gains of this surgery. In fact, it can end up causing even more problems for you.

So, is it ever okay to smoke after getting implants? Let’s find out.

Can You Smoke After Dental Implants?

You can smoke after getting dental implants but only months after the surgery. By that time, the process of the bone integrating with the implant – osseointegration – will have started.

Also, your tissues will have gotten enough time to heal (not completely though). So, it’d be safe-er for you to start smoking then (although it would be much better to quit it altogether).

However, having implants doesn’t mean that you can never smoke, you need to wait for some time before you can do it.

When Can You Smoke After Dental Implants?

You can smoke 2-7 days after the placement of the dental implant. It’s important that you absolutely do not smoke anytime before that, even if you’re doing “light” smoking.

The osseointegration process itself takes 3-6 months to complete. It may or may not be complete after 3 months, but you’re less likely to damage your implant then. However, the longer you don’t smoke, the better it is.

Here’s a timeline of when you can smoke before and after different stages of the dental implant surgery:

It’s important that you follow the aftercare instructions of your dentist in this regard so that you can recover without any delays or complications.

However, keep in mind that, in general, smoking can worsen your overall oral health, which can cause problems in the future with your crowns as well as implants.

What Happens If You Smoke After Dental Implants?

The following problems may result if you smoke sooner than recommended by your dentist after getting an implant.

Smoking can increase the risk of oral infection after the placement of the implant. And there are multiple ways in which it does that.

For one, smoking suppresses the immune system, which makes it difficult for the body to fight off any microbial invasions. Additionally, it constricts blood vessels, so not enough blood cells would be reaching the wound site.

A study published in the Clinical Oral Investigations also found that the activity of a particular enzyme called arginase was increased in those individuals who smoked.

And this affected the production of nitric oxide – an antimicrobial – which increased the risk of bacterial infection in smokers.

Other than that, smoking also increases the risk of gum disease due to the increased formation of bacterial plaque (smoking creates perfect conditions for it). The infection can eventually penetrate the jawbone itself and cause tooth loss.

It’s a known fact that smoking slows down healing and increases the risk of complications after any surgery, even one that involves dental implants.

Keep in mind that nicotine in cigarettes constricts the blood vessels. That means that the healing wound in your mouth won’t get the adequate oxygen and nutrients that it needs to heal.

Additionally, it reduces the amount of oxygen in the blood because of the reduced lung capacity.

Not just that, but it also clumps up the platelets. And these cells are needed to stop blood loss at the site of an injury.

So, these are different ways in which smoking after dental implants will slow down healing. And this will increase the risk of infection at the implant site.

Peri-implantitis refers to the inflammation (soft and hard) around the dental implant and it can be quite destructive.

It also occurs due to the accumulation of bacteria at the site of the implant. Left untreated, it can also end up causing bone loss.

And according to the American Academy of Periodontology, smoking is one of the risk factors for this disease.

A research published in the Journal of Clinical Medicine also found that smokers were at a higher risk of bone loss due to peri-implantitis. Additionally, they were more likely to experience dental implant failure.

Does Smoking Cause Implant Failure?

There are different ways in which smoking can lead to implant failure, which are explained as follows:

Smoking can cause weakening and degeneration of the bones in your mouth and body. It decreases the absorption of calcium, which your bones need for strength.

Also, it affects the production of cells known as “osteoblasts, ” which your body needs for the development of bones.

The reduced blood supply further exacerbates the problem. And as a result, smoking can lead to bone loss.

Without enough bone in your mouth, the dental implant will not stay anchored in place. In fact, it will become loose and eventually fall off, resulting in implant failure.

A study in Annals of Periodontology also suggests that it’s not the impairment of the osseointegration process that causes implant failure due to smoking. It’s actually in the second stage of surgery that smoking leads to implant failure.

The second stage of implant surgery is when the dentist cuts into the gum tissue to expose the implant and place an abutment on top of it. The dental crown is then fitted on top of the abutment.

According to the researchers of this study, the exposure of the underlying tissue to tobacco smoke during this stage is what eventually leads to implant failure.

Can You Vape After Dental Implants?

You should not vape or use any other kind of e-cigarette for at least 3 months after the implant surgery. That’s because these also contain harmful substances that can affect your healing process.

Research shows that e-cigarettes can also lead to implant failure. Additionally, these are risk factors for peri-implantitis. Therefore, it’s not a good idea to use them.

How To Avoid Smoking While Recovering From Dental Implant Surgery?

There are certain things that you can do to avoid smoking, even if temporarily.

You should also consider getting professional help with this as it can be difficult to quit smoking.

Heavy or light smoking after dental implants can be detrimental to your recovery. Not only can it slow down healing but also result in implant failure.

If that happens, you’ll need to have the surgery once more, which will be an additional financial burden. That’s why it’s best to avoid smoking for as long as advised by your dentist.

It can be difficult but you can try some things out to stay away from it. And if you’re having difficulty doing so, don’t hesitate to get in touch with a professional.