Are Ronaldo’s Teeth Really His Own? 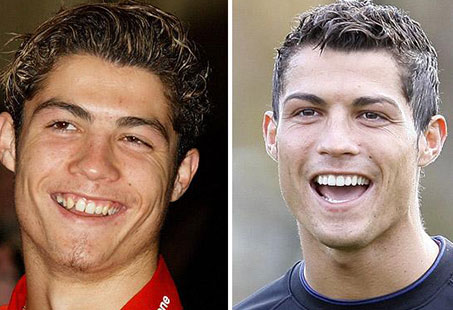 That insane footwork aside (even his jumps are apparently 5 times more powerful than a cheetah), every inch of that man is a star, including his oh-so-gorgeous smile. He deserves all the sexiest man/footballer/athlete titles coming his way.

But we’re only here to talk about his teeth. Arguably, it’s one of the best smile transformations that we’ve seen happening.

However, many people are curious whether it’s just the magic of old-fashioned orthodontics or some secret cosmetic dentistry. How exactly did Ronaldo make his teeth look like that? Let’s find out.

Who Is Cristiano Ronaldo?

It’s for more than just introductions. Sure everyone knows who Ronaldo is but few only really know, know him.

Cristiano Ronaldo dos Santos Aveiro (his name was actually inspired by none other than Ronald Reagan himself who his father was a fan of back in his days as an actor) was born in Funchal, Portugal in 1985 to a financially struggling family of 4.

It was around the age of 7 that he actually started playing soccer. While he remained in school till the age of 14, he was actually expelled for throwing a chair at his teacher who had made fun of his poor background.

After that, his school days were over and he kept his eye on the ball. Just two years before that, at the age of 12, he had also signed a contract with Sporting Lisbon.

But things came to a screeching halt when he was diagnosed with a heart condition at the age of 15. While that would have meant the end of his career as a footballer, he was (thankfully) able to have the condition treated by surgery.

Soon after, he caught the attention of one of the biggest football clubs – Manchester United – who he then signed with in 2003.

From there, he went on to become one of the greatest Premier League players; a Man Utd. legend (that run’s probably come to an end now). And he has achieved countless achievements since then.

Ballon d’Ors, European Golden Shoes, UEFA titles, Premier League titles, highest goalscorer, whatever it is, you name it. The guy even has a museum dedicated to him in his birthplace.

While his most recent World Cup dream may have ended, Ronaldo isn’t leaving the hearts of his fans anytime soon.

How Did Cristiano Ronaldo Fix His Teeth?

While we’ve only really seen him wear braces, Ronaldo definitely has had some cosmetic dental work done like gum contouring and crowns/veneers. So, let’s take a look at the details:

After he had joined the big leagues, some big changes were in order for him (let’s not talk about those blonde highlights), so he started with his teeth. That’s when he decided to get braces.

While now there’s Invisalign to fix the smile more discreetly. Back then, ceramic braces were more popular if you didn’t want to bring too much attention to the wire framework on your teeth.

The even smile that you see today wouldn’t have been possible without those braces. Because you see, before he got that smile, his teeth were quite wonky.

On the left side of his mouth, the tooth right next to his central one was missing (maybe it was a sports injury). And when there is a gap from a missing tooth, the teeth adjacent to that gap start shifting towards it.

So, when he got the braces, his dentist probably fit a false tooth in that gap (the implant usually comes later). It’s possible that a coil spring was used to make space for that considering the gap was not too big at first.

However, getting braces was the first thing that he did to better align his teeth. And then other treatments followed that.

Once his teeth were in place, Ronaldo probably went on to get a dental implant. Since implants act like permanent replacements for tooth roots, they’re better than having a crown bridge.

A crown bridge is something that’s used to replace 1 or more missing teeth. It consists of two or more dental crowns. The crown on one or both ends is fitted on top of the teeth that are adjacent to the gap.

Now, it’s possible that Ronaldo had this instead of a dental implant, but dentists usually recommend implants if the patient can afford it (which would not have been a problem since he had joined Man Utd. for a whopping £12 million when he was 18).

But crowns and an implant weren’t all that he needed. Notice, how the biting ends of his teeth were jagged back then? There’s a simple fix for that.

The jagged bumps at the ends of the teeth are known as mamelons. You’ll notice a lot of children have them but they smooth out with time due to wear.

Considering Ronaldo had very popular ones and his star was rising, he probably sped things up with a little bit of teeth shaving.

It’s exactly how it sounds. Dentists use a file or disc to make them go away permanently. And the treatment doesn’t cause any pain either.

With all those out of the way, his gums were the only ones that were left. Notice how his teeth are now longer than they used to be?

That’s because Ronaldo probably had some of the gum tissue on top of his teeth removed. Gum contouring is a very popular treatment for getting rid of a gummy smile.

It’s quite likely that Ronaldo went on to have more crowns and veneers for his upper and lower jaws.

It’s evident if you take a closer look at his before and after photos. There used to be the slightest of gaps between his central incisors, for instance. However, you won’t see that anymore because his teeth probably have crowns on them.

They could also be veneers but since crowns are more durable and last longer, it’s likely that he had crowns instead of veneers.

Ronaldo’s old teeth are long gone. What you’re looking at is the work of cosmetic dentistry, a combination of teeth shaving, gum contouring, crowns/veneers and an implant.

While braces paved the way for all these things to happen, no way can you make your teeth look like that without any treatment.

Ronaldo, of course, hasn’t said anything about any of the dental work that he has had done (he probably won’t either) but you only need to take a look at his teeth to see how different they are now from the young Ronaldo’s teeth.

Of course, that doesn’t change the fact that Cristiano Ronaldo’s smile remains one of the most dazzling and gorgeous ones out there.