Mewing: How It’s Done & Does It Actually Work? 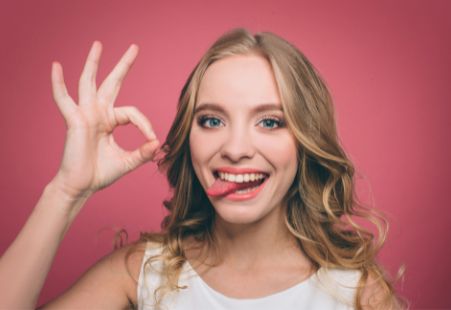 Every day you hear about a new health fad on social media. While mewing may seem like one, it has been around for quite a while. However, it started gaining popularity back in 2019. Since its presentation, the practice has been myriad in controversy. Still, it has many adherents who claim that mewing helped reshape their face, and quite dramatically so.

The problem is that mewing has its dangers. And social media has presented a distorted picture of the practice, with many people using face “before and after images” to “prove” that mewing really works. In reality, though, it has no scientific basis.

Mewing is an oral exercise aimed at reshaping the jaw and retraining the position of the tongue. It’s a practice named after John Mew, a British orthodontist who created “orthotropics” – defined as “a form of natural orthodontics” that’s based on the “science of influencing facial growth direction” by the London School of Facial Orhtotropics (LSFO).

Moreover, it’s described as focused on “oral posture, muscle function, and the balance of the lips and tongue.” Together, this is claimed to improve the way in which the face grows and even “cure” malocclusion, which is unlike the traditional approach of getting braces.

Mewing was also popularized by the son of John Mew, another orthodontist, Michael Mew, who has hundreds of videos on the subject on his YouTube channel named “Orthotropics”. Although, it should be noted that neither the senior nor the junior Mew coined the term “mewing.” It’s what the people had begun calling the practice after its founder.

While originally the technique was used on children, it has also been adopted by adults who want to reshape their faces or treat some oral health problems. It’s important to note that John Mew’s GDC license was revoked for deviating from traditional orthodontics. He was also reprimanded for criticizing the GDC for suppressing “orthotropics.”

In a video, Mike Mew has also admitted that he was expelled by the British Orthodontic Society because, according to what he says, his social media posts had misled the patients/public or had the potential to do so.

What Are All the Mewing Benefits?

The aim of mewing is to help with the problems that have arisen as a result of the shrinking of the jaw. According to research, industrialization, sedentary lifestyles, agricultural life, bad oral postures, and the availability of softer foods have resulted in this shrinking. Because there isn’t enough space in the mouth to accommodate all teeth, problems like teeth misalignment occur.

Therefore, by addressing the position of the tongue, swallowing pattern, and weak jaw muscles, orthotropics aim to increase the “cross-sectional area” for the teeth. Mewing has no scientific basis, so the evidence of its benefits is purely anecdotal. As far as they go, they are claimed to be as follows:

It’s quite possible that people have more to say about its potential benefits. Mewing is not just one exercise; it’s a combination of different practices and exercises that are claimed to help with different problems. Keep in mind that John Mew’s work has been discredited and unvalidated.

How To Do Mewing?

One way to do this is to make “-ng” sound like that at the end of the word “ring.” Eventually, the exercise should reposition your tongue. Apart from mewing, people also make sure to chew their foods thoroughly and to try tongue chewing, as well as swallowing in a wave action to reshape their faces.

How Long Does Mewing Take To See Results?

People have to do these exercises repeatedly throughout the day so that eventually, the tongue is repositioned. That will allow the results to persist, but that’s not an easy thing to do.

Is Mewing Real or Fake?

Currently, there is no peer-reviewed study suggesting that mewing actually works to reshape the jaw. In one of his videos, Mike Mew mentions his then-partner telling him that he looked better than he did 10 years ago. He also gives examples of nurses becoming “better looking” after they took up this practice.

However, this kind of evidence is merely anecdotal. The founders of this practice have, it goes without saying, supported mewing. But since their work has been discredited and considered “wrong”, mewing has no credible, scientific support.

The evidence presented by “influencers” on social media can hardly be taken at face value because it’s well-understood that videos and photos can be easily manipulated. Certain postures, angles, and lighting can further enhance the effect that they’re trying to achieve. Therefore, again, there’s no credible evidence.

Can Mewing Cause Damage To Your Face?

Mewing can be harmful. Instead of realigning your teeth and jaws for the better, it can end up worsening the problem. In addition, as pointed out by Mike Mew himself, some people can end up experiencing jaw joint problems, which can be difficult to treat.

It can end up causing temporomandibular joint (TMJ) pain instead of treating it. Some people who have tried it also report experiencing pain and discomfort, along with the muscles in their neck and jaw is affected.

What Are the Alternatives To Mewing?

The following treatments can act as alternatives to mewing:

One of the most traditional orthodontic treatments for aligning teeth and jaw is the use of braces. A metal wire is passed through brackets fixed on the teeth. It exerts pressure on the teeth, helping them move in the desired direction. Braces are effective and have worked to reshape the face.

Fillers are popularly used for jaw contouring. It’s a safe and effective alternative to mewing. However, fillers are not permanent. They can last for as long as 2 years, after which you’ll have to get the injections again to maintain the results.

The placement of implants requires an invasive surgical procedure, but the results are permanent. These have been popularly used for the augmentation of the chin but can also be placed in the jaw to improve facial balance.

It’s not always possible to lose fat deposits in different parts of the body through diet and exercise. In that case, liposuction can help. Deposits of fat around the jawline can affect its definition and shape, so the surgery can suction them out to improve its appearance.

Like fat deposits, saggy skin can hide the real shape of the jawline. And although it is claimed that mewing can “lift” the face, there’s little to no evidence to support that. A facelift, on the other hand, is a surgery that removes the excess skin and can actually help you achieve that. The surgery also tightens the underlying muscles and repositions fat so that the skin appears smooth and taut.

This is a corrective surgery that is recommended if there is misalignment between the upper and lower jaw and it’s causing other health problems. In this surgery, the jaws are moved backwards or forward to better align them. It can take you more than a month to fully heal from this procedure. Also, it is possible for the dentist to place braces on your teeth after the surgery has taken place.

It’s almost an everyday occurrence that’s something gone trending or viral on social media. Although mewing has been around for quite some time, it was only popularized a few years back in around 2019. Influencers came forward with “unbelievable” results from this technique, so it took off. However, the problem is that the work of the Mews is not supported by scientific evidence, and their theories have also been considered wrong.

The examples cited by the Mews and their followers are anecdotal evidence, and it’s not verifiable. It cannot be said that the photos that you see on the internet are true or accurate. In addition, there’s no guarantee that mewing will give you any results. It may be years before you see any difference. Instead, there are safe and effective alternatives to mewing that you should discuss with your doctor.