Pericoronitis: What Is It, Symptoms, Risk Factors & Treatments 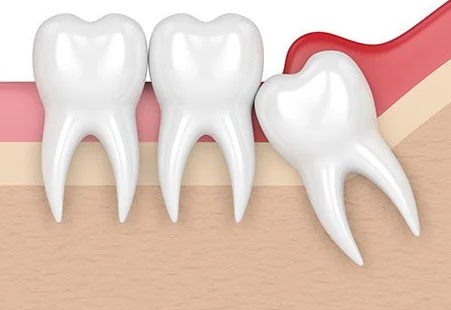 Human evolution has resulted in the shrinking of the jaws. That has happened with changes in our diet and lifestyle over time. And because of that, wisdom teeth have become vestigial – they have no use. Even so, they are still present, causing problems when they erupt; pericoronitis is one example of it.

It’s true that not every kind of wisdom tooth needs to be treated. Some people grow them normally, but that’s usually not the case. The way in which it comes out and the changes to the surrounding gum tissue can cause oral health problems, which can even become life-threatening.

Pericoronitis is an infection of the gums around the wisdom teeth (third molars) while they’re in the process of erupting. It is also known as operculitis. More commonly, this condition affects the wisdom teeth in the lower jaw. Because there’s not enough space in the mouth, they’re only able to come out partially.

While some of the tooth sticks out of the gums, the rest of it is covered by a flap of gum tissue known as the operculum. The operculum has an opening where food particles, bacteria and plaque can get stuck and accumulate. Infections can easily develop in these areas since they are more difficult to clean.

This condition can be recurrent and has two types. You may end up experiencing both acute and chronic pericoronitis depending on how long the condition has been left untreated:

A study published in the British Journal of General Practice reports that the incidence of pericoronitis is 81% in people between the ages of 20 and 29. Research has also shown that wisdom teeth that are erupting vertically are at an increased risk of pericoronitis.

The gum flap covering the partially erupted tooth becomes a breeding ground for bacteria. However, there are certain factors that can increase the incidence of this problem. These are as follows:

What Are the Symptoms of Pericoronitis?

Depending on the severity of the problem, you can experience the following symptoms as a result of pericoronitis:

If the condition is left untreated, you can also end up developing an abscess. The infection can also spread to other regions, such as the tongue, jaw, throat, neck and head. There’s also a risk of the infection spreading to the bloodstream (sepsis), which can be fatal.

How Is Pericoronitis Diagnosed?

If you’re experiencing any of the above-mentioned symptoms or feel like something’s out-of-the-ordinary, you should immediately get in touch with your dentist. They will perform a clinical assessment.

The dentist will check for any swelling and other signs of inflammation or infection. In addition, they’ll see how the tooth is positioned and erupting. An X-ray of your teeth might also be needed to rule out other dental problems and evaluate how the tooth is lodged into the jawbone.

How To Treat Pericoronitis?

Depending on the severity of the problem, your dentist may recommend one or more of the following treatments.

The dentist will begin the treatment by trying to clear out the infection. For that, the particles stuck in the gum flap are flushed out. In addition to that, the dentist will recommend the use of disinfecting chlorhexidine mouthwash.

An oral irrigator might also help, and it can be used at home. Using a high-pressure waterjet, particles in difficult-to-reach places of the mouth can be removed. As far as some other at-home remedies are concerned, you could also try a salt water oral rinse for temporary relief.

Your dentist will also prescribe you oral antibiotics to treat the infection. Usually, penicillin or metronidazole are given for this. If you’re allergic to penicillin, make sure to inform your doctor about it. You may be prescribed erythromycin in its stead. Topical antibiotic gels are also available, but the treatment will depend on the condition of your gums.

Additionally, since you’d be experiencing pain during the recovery process, the dentist will also prescribe over-the-counter painkillers. Make sure to take them as instructed.

Since it is the gum flap that’s causing the problem, operculectomy aims to remove it so that the food particles and debris don’t get stuck there and cause an infection. Generally, this procedure is recommended if the wisdom tooth can erupt normally.

Operculectomy is a minimally invasive procedure that takes place under local anaesthesia. The dentist simply cuts away the flap either using a scalpel, laser or electrodes. Following the procedure, you have to avoid smoking and eat soft foods for a while. It can take a whole month for the surgical wound to heal.

Even after the procedure, the dentist will monitor the eruption of the tooth. Here, you should keep in mind that the gum tissue can grow over the wisdom tooth once more. In that case, you’ll need to have this surgery again.

When you’re experiencing severe problems with your wisdom tooth and it’s trapped in the gum tissue or jawbone, the dentist may recommend a tooth extraction. According to the American Association of Oral and Maxillofacial Surgeons (AAOMS), many people who keep their non-symptomatic wisdom teeth end up needing surgery eventually.

Given that, preventative wisdom tooth extraction is quite common. That’s because exactly how the wisdom tooth will come out is hard to predict. AAOMS also warns that retaining the third molar increases the risk of gum disease and postoperative complications (when the surgery becomes necessary), especially as a person ages.

Your surgeon may also recommend the extraction of the tooth right above the wisdom tooth. That’s because, according to the US National Library of Medicine, trauma to the gum tissue from the opposing tooth increases the risk of pericoronitis. It can also worsen the existing symptoms and end up causing ulcers.

Keep in mind that a wisdom tooth can even damage the surrounding tooth. If that happens, you’ll end up needing more extensive surgery. To avoid these complications, you might be recommended a preventative wisdom tooth removal by your dentist.

Will Pericoronitis Go Away On Its Own?

Pericoronitis will not go away on its own. You will need to get treated either through non-surgical or surgical measures. You should also not leave it untreated because it will not get better with time. In fact, the symptoms will continue to worsen, and it can be life-threatening. Additionally, earlier intervention would mean less invasive treatments that won’t be as expensive as surgery.

Will Pericoronitis Come Back?

After the surgical removal of the third molar, it is rare for pericoronitis to come back. As mentioned before, it can develop due to trauma to the tissue. However, if that has been taken care of through extractions in the upper and lower jaw, you should not worry about this. However, make sure to follow the aftercare instructions of the dentist after the procedure. It can take as long as 1 to 2 weeks to recover.

How To Prevent Pericoronitis?

You can reduce the incidence of this condition and even prevent it entirely if you can manage the risk factors. That can happen if you:

Keep in mind that even if you’re asymptomatic and don’t have any gum disease because of the third molar, your tooth needs to be monitored. That’s because it can become more problematic in the future.

Pericoronitis is a common problem that people experience when their third molar has partially erupted. It develops because it’s already difficult to clean that area, and a pocket of gum tissue also traps food particles, bacteria and debris into it.

No matter what, you should get that tooth checked by a doctor. If you have pericoronitis, you need to get treated as early as possible to prevent the problem from worsening. There are non-surgical and surgical treatment options. Your dentist will recommend one, depending on the severity of your condition.