Tom Cruise Teeth: What’s the Story Behind the Unitooth? 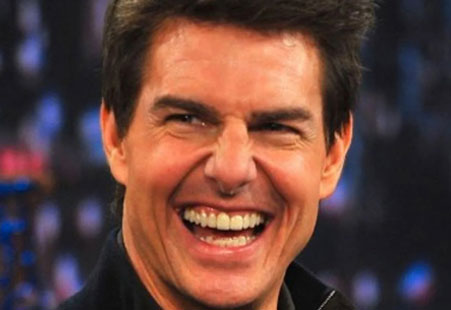 Being one of the biggest stars in Hollywood, Tom Cruise is no stranger to rumours and controversies. Tom Cruise teeth have been at the centre of it from time and time again. Known for his dashingly good looks and versatility as an actor, the megastar is still flying high even as he approaches his 60s.

Even though the Top Gun star’s looks have changed dramatically throughout the years, it’s his teeth that’s always left people with a lot of questions. So, let’s find out what’s really going on with them.

Who Is Tom Cruise?

Dubbed as “Hollywood’s last real movie star,” Tom Cruise is the stuff of legends. He’s been gracing the big screen since the 80s, smashing out one hit after another, not letting any of his personal life drama or even his age deter him. Despite being on the top of his game, he has managed to stay elusive, not accounting for the display of some “bizarre” moments here and there.

Thomas Cruise Mapother IV was born in 1962 in New York and later took on the stage name Tom Cruise. Since his father was a part of the Canadian Armed Forces, he grew up in Canada, where his interest in acting was first cultivated. It was at the age of 18 when he seriously started to pursue acting, for which he first went to New York and then Los Angeles (LA) – synonymous with Hollywood itself.

He got his first role in Brooke Shields’ Endless Love as Billy. However, he went on to play more prominent roles in Taps and The Outsiders. But it was his breakout role in Top Gun that got everyone’s attention. From there on, it was an upward trajectory for the action star, who went out to star in the critically acclaimed Rain Man, Risky Business, The Color of Money, Born on the Fourth of July, Jerry Maguire, and Magnolia, among many others.

He has also been a part of some of the biggest movie franchises, the most successful of them being Mission Impossible, in which he has done many life-endangering stunts as his character Ethan Hunt. While Mission Impossible 8 is still in the works, he recently starred in part 2 of the cult classic Top Gun.

It goes without saying that this Hollywood A-lister is one of the highest-paid and highest-grossing actors of all time. He has also won Golden Globes and received nominations for the Academy Awards and British Academy Film Award. More recently, he was given an honorary Palme d’Or at the Cannes film festival 2022.

What Happened to Tom Cruise Teeth?

From a very young age, Tom Cruise teeth weren’t exactly “Hollywood dazzling.” They were misaligned and chipped with a pronounced overbite. However, before making his way to Hollywood, he got some dental work done. We know that was the case because reportedly, he removed the “cap” (another name for dental crown) from one of his front teeth (probably the one on the right) to add to his character of Steve Randle in The Outsiders.

It is believed that his teeth were badly damaged as a result of a sports injury involving a hockey puck. The actor did play hockey when he was young, so it’s possible that he knocked his teeth out as a result of that.

A missing tooth on the left side of his upper jaw is also the reason why he has the “middle tooth.” His teeth have shifted to the left, which is why his dental midline is also to the left. This is actually something that happens when people are missing their teeth. The surrounding teeth shift into the space left behind, which can make them misaligned and crooked.

There are also some other stories about Tom Cruise teeth. One involves the former editor-in-chief of The New York Post, Col Allan. Apparently, Tom Cruise’s front teeth fell out when he was having drinks with the journalist.

Allan recounts being “speechless” because of the incident. At that time, Cruise told Allan that he had lost his teeth after one of his children’s heels struck them while he was playing with them. While the actor had “pleaded” that the information not be made public, that, unfortunately, is not the case anymore.

When Did Tom Cruise Get His Teeth Fixed?

Tom Cruise teeth have undergone a variety of changes during the course of his career. As mentioned before, he had dental crowns at the time of The Outsiders. Dental crowns usually last for 10-15 years, so he would have needed them replaced. Other than that, his wearing braces at the 2002 premiere of Minority Report is the most widely circulated evidence of him getting dental work done.

He had ceramic braces at the time since they blend in more with the natural teeth. From his pictures, you can see that the brackets on his teeth are transparent. Although there’s something else to see if you closely look at his photos from that time: his gums. They appear even.

However, if you look at the photos of Tom Cruise teeth now, the gum tissue on his left central incisor is more than that on his right central incisor. The size of the tooth has also changed. The right tooth is bigger than the left one.

It is possible that the actor had a crown lengthening or gingivectomy procedure in later years. Some people need these before getting dental crowns. They involve the removal of gum tissue above the tooth so that more of its structure is exposed. This provides a greater surface area to the crown for bonding and anchorage. It may be the reason why his gum line is not even anymore and why the size of his one tooth is now bigger than before.

What Other Dental Procedures Did Tom Cruise Get?

It is believed that the Mission Impossible star had veneers, not crowns, on his teeth. It is possible for people to get both crowns and veneers at the same time. What will suit them better will depend on the condition of their teeth, their location and the severity of their problem. But veneers can also effectively hide the teeth, although it only covers their front surface.

Other than that, Tom Cruise may also have had a teeth whitening procedure. Despite him having a “unitooth” and not the traditionally “perfect” teeth, there are many people who admire his million-dollar smile. And the reason why it dazzles so maybe teeth whitening treatments.

Keep in mind that dental restorations like crowns and veneers cannot be whitened. You have to take care of your teeth. And for them to not look too white and stand out from the rest, many people get teeth whitening procedures done.

Has Tom Cruise Ever Said Anything About His Teeth?

Tom Cruise remains elusive to this day. The actor hasn’t confirmed or denied anything about his teeth. We only know that he had work done from his pictures and the fact that he very publicly got braces at the age of 40. There are many rumours about the Minority Report star that he hasn’t ever said anything about.

Despite being in the spotlight for more than 40 years, there isn’t much that people know about him. There was a time when people thought that he had a rhinoplasty or nose job. However, in an interview with Playboy Magazine, he made it clear that it wasn’t the case and “never would” be.

As mentioned before, Tom Cruise does have a million-dollar smile. His dentists would have tried their best to make what they could out of his situation. It may not have been possible for him to undergo more invasive and extensive procedures because of the time constraints his career put on him. He has constantly been in the spotlight since the 80s.

That said, the actor’s midline could have been better if he had had an implant after he had lost his tooth. The dental implant would have acted as a substitute for the natural tooth and not allowed the surrounding teeth to shift. With a crown placed on top of the titanium screw, Tom Cruise teeth would have looked even more glamorous since his midline would have been at the centre of his face.

Tom Cruise teeth have been a subject of much debate and discussion by his fans. His teeth certainly deviate from the Hollywood norm. However, looking back at his photos, you can see that from a very young age, he had issues with misalignment.

Of course, that would have been a problem once he started appearing in big movies, so he got his teeth fixed through cosmetic restorations like crowns or veneers or both. Still, his midline (the parting line between the two front teeth) is shifted to the left. This has been the case from the very beginning and remains so to this day. His dentists would have tried their best to do what they could with his teeth in a short amount of time, and his smile does look great.