Is it Possible to Tell How Rich You Are From Your Smile? 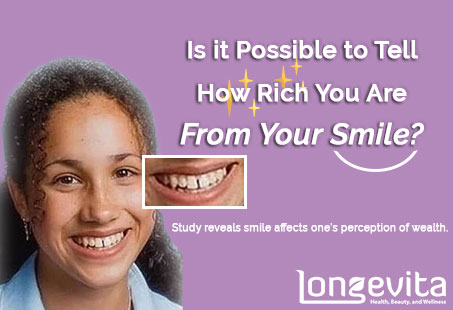 How deceptive can a smile be? They can make a person look attractive, friendly, intelligent, outgoing, and successful. And interestingly enough, it also makes one look rich, but how rich exactly? Here at Longevita, we sought to put an end to the question.

Having signed a multi-million dollar deal with Netflix, you’d expect the Duchess of Sussex, Meghan Markle, to have a million-dollar smile. Unfortunately, that’s not what 63% of our voters thought.

They didn’t know that they were looking at Meghan as only her teeth were shown. When asked how much she makes in a year, they said it would be less than £30,000. Only 10% of the voters thought that she made more than £70,000.

Meghan Markle was not the only celebrity whose “before” picture was used. It included the smiles of 9 other celebrities and the “after” pictures of 10 of our patients. The following celebs were included: Emma Watson, Victoria Beckham, Nicola Roberts, Tulisa, David Beckham, Colin Firth, Niall Horan, Sam Thompson and Louis Walsh.

28% of the voters thought that the patients who had a smile makeover were rich. On the other hand, only 16% of the voters thought the same about celebrities. Nicola Roberts was the most voted female celebrity to be considered “rich,” while among males, it was Niall Horan and Louis Walsh. Although there were more votes for Niall Horan earning £70,000 and above than Louis Walsh.

Our male and female patients leading in the £50,000 and above category received more votes than Nicola Roberts and Niall Horan. Therefore, their smiles made them look richer than the celebrities.

Teeth misalignment, colouring and gaps didn’t let two very famous stars from getting ahead. Unfortunately, Emma Watson and Sam Thompson were considered the least wealthy. More than 70% of people thought that they only earned £30,000 and above.

Overall, things did not look so good for celebrities whose teeth were shown before they had any work done on them. Clearly, if you have a more average smile compared to a beautiful one, people think that you’re not that rich, even though it may not always be true.